Japan’s largest LNG importer JERA has acquired 27% of the outstanding shares of Aboitiz Power, one of the biggest utilities in the Philippines for $1.58 billion. The deal will expand JERA’s presence in the country and is hoped to advance the rollout of zero-carbon energy sources, including hydrogen. 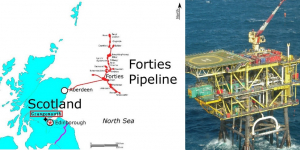 Low gas production, down 28% year-to-date, combined with high coal and carbon prices and booming LNG demand in Asia, is fuelling a price rally at the British gas trading hub NBP. Though production is forecast to recover to 35 Bcm in 2022, LNG will have to balance demand this winter. 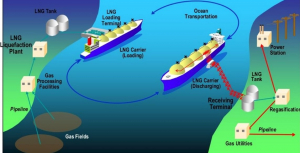 Carbon capture and storage (CCS), alongside with electrification could substantially decarbonise LNG projects. More than 25% of overall emissions could be removed depending on the technology adopted, Wood Mackenzie says, with capturing reservoir CO2 found to be much cheaper than post-combustion capture.

Sept 1 – LYTT, a provider of real-time insights to oil and gas operators through a fiber optic sensor, LYTT is testing novel technology to monitor CO2 transport and migration in storage reservoirs together with SINTEF, an institute for applied research. Tracking dynamic multiphase flow is essential when monitoring the long-term effectiveness of carbon capture storage (CCS). 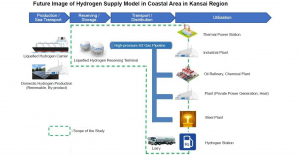 Marubeni, together with Iwantani and Deloitte Tohmatsu, studies the feasibility of setting up a hydrogen supply chain in the Kobe/Kansai region. Use of low-cost imported hydrogen for power generation and transport is essential if Japan wants to achieve its aim of a carbon-free society by 2030. 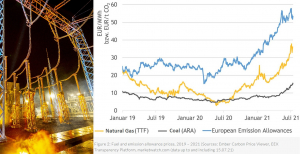 Prices European Electricity Exchange (EEX) have tripled to over €90/MWh since the end of Covid-related lockdowns, as the economic rebound pushed up prices for coal natural gas and carbon emissions. China’s hunger for hard coal in turn drove up the price to €15/MWh in Europe, while gas prices at the TTF hub surpassed €36/MWh. 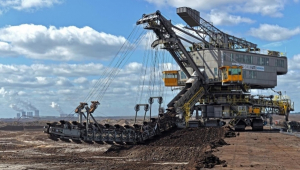 Rising CO2 costs accelerate the coal exit in Germany. With the EU’s carbon price trading above €56 per ton, a lignite power station in Chemnitz will be shut early and the conservative chancellor candidate Armin Laschet suggested North Rhine-Westphalia (NRW) “could manage [the coal exit] as early as 2030” – years before the mandatory exit date in 2038. 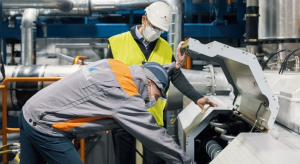 Full-scale engine tests for hydrogen and ammonia co-firing are underway at Wärtsilä's laboratory in Vaasa, Finland, to assess the optimum parameters for combusting carbon-neutral fuels. The aim is to have an engine and power plant concept for pure hydrogen operation ready by 2025.

The European Commission’s ‘Fit for 55’ legislative sets a 55% net emission reduction target to 1990-levels by 2030 and acknowledges the critical role electricity will play. “Everything that can be electrified, should be electrified,” analysts commented. For industry sectors not suitable for electrification, Brussels is promoting low-carbon hydrogen, carbon capture and storage and biofuels. 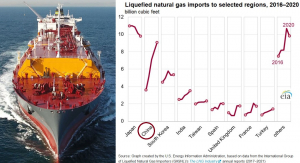 Only Asia has seen LNG imports rise despite the pandemic, largely due to the Chinese government’s coal-to-gas switching policies which pushed up imports by 1.0 billion cubic feet per day (Bcf/d) in 2020. India’s LNG imports increased 0.4 Bcf/d amid low prices for spot cargoes in spring and summer.

Rolls-Royce conducts laser field tests in the US

Gas vs oil ratio increases in the Bakken

May 17 – The ratio of natural gas to crude oil production has risen in North Dakota’s Bakken region since 2008, and continues to accelerate. According to the US Energy Information Administration's (EIA) Drilling Productivity Report, annual gas gross withdrawals in the Bakken increased by 9% to an annual high of 2.97 Bcf/d in 2021, even though the region’s crude oil production fell by 6%.

May 16 – The Middle East, a region vulnerable to climate change, is undergoing a major shift from petroleum-based power plants towards gas-fired generation and renewable power sources. Capacity additions of over 185.46 GW are the pipeline, according to ResearchandMarkets, as the regions electricity demand for industry and residential cooling is set to grow. In fact, cooling already accounts for 70% of residential power demand.

May 13 – The market for carbon utilisation is forecast to grow rapidly from the 2030s onwards to surpass $285 billion by 2042, driven by rising climate commitments and a favourable regulatory framework. In its latest report IDTechEx also highlights the role of technology advances such as thermodynamics which help sequester CO2 permanently.

May 12 – Rolls-Royce has gained approval to use synthetic fuels in its MTU Series 4000 and Series 1600 diesel engines for power generation application. Field testing confirmed both engines can use a range of sustainable fuels including biomass-to-liquid, hydrotreated vegetable oil and power-to-liquid fuels such as e-diesel.

E.ON tells Germans how to save gas

May 11 – A large-scale switch to heat pumps, solar power and better demand-side management could help save Germany nearly 100 TWh of natural gas per year, E.ON has said, calling on households to contribute to Europe’s efforts to reduce reliance on Russian gas imports. “If 10% of the homes in Germany are equipped with solar PV installations, 20% of gas boilers are replaced by heat pumps, and the average temperature in all households is reduced by one degree Celsius on average, this would lead to natural gas savings of 103 TWh per year," E.ON Energy CEO Filip Thon said, noting this volume would equate to about 30% of Germany’s current gas imports from Russia.

May 10 – Exelon has reported lower first quarter earnings and a higher operating revenue, having completed the separation of Constellation Energy – Excelon’s former power gen business. Focussing now solely on transmission and distribution, Exelon’s net income from continuing operations for the first quarter of 2022 decreased to $0.49 per share from $0.53 a share in pre-year period. In contrast, adjusted operating earnings notched up to $0.64 per share, primarily due to due to higher electric distribution earnings at ComEd from higher rate base and higher allowed electric distribution. Rate increases at Excelon’s group companies PECO, BGE, and PHI were partially offset by higher depreciation expenses at BGE and PHI.

May 9 – South Africa’s Department of Mineral Resources and Energy, has just announced the REIPPPP BW6 Request for Proposals (RFP).  The bid round will add 2,600 MWs of new capacity to the energy mix. The ministry seeks to procure 11,813 MW of electricity from various power sources including renewable energy, storage, gas and coal.

May 6 – GE Gas Power’s increased focus on cybersecurity has been recognized by the Common Vulnerability and Exposures Programm as a ‘CVE Numbering Authority (CNA).  As such, GE Gas Power can now assign CVE identification numbers to newly discovered vulnerabilities potentially related to its products and allow GE Gas Power to directly publish new CVE Records and streamline the reporting process.

Heliogen gets nearly $90m in funding

May 5 – Heliogen has moved from design into testing and implementation of its supercritical CO2 power gen system that will be deployed for Woodside in California. The system consists of a 5 MWe sCO2 power block integrated with high temperature solid media thermal energy storage. The demonstration project is being funded with up to $50 million from Woodside, along with $39 million from the U.S. Department of Energy (DoE).

Capstone to install microturbine in the Caribbean

May 4 – E-Finity Distributed Generation, Capstone's distributor for the Mid-Atlantic, Southeastern United States and the Caribbean, has secured an order for two C1000S microturbines for a government water authority in the Caribbean. The 2 MW system will provide emergency standby power to several pumping stations throughout the remote island community and is scheduled to be commissioned towards the end of 2022.

April 29 – The market for steam turbines for power generation will grow around 6.5% through to 2027, driven by the build-out of combined-cycle gas power plants – notably in Asia and the United States, ResearchAndMarkets finds. Coal power projects in China, India and Bangladesh also require significant numbers of steam turbines. “Many of the countries in Asia-Pacific cannot provide 24-hour electricity to its citizens, and the cheapest way to achieve the objective is to build thermal [coal power] plants and use steam turbines,” analysts commented.

April 28 – Antigua Power Company Limited (APCL) has contracted Wärtsilä to supply and install a 46 MW dual-fuel power plant on the Caribbean island. The plant will operate primarily on regasified LNG, imported through a small-scale import terminal developed by U.S.-based Eagle LNG in partnership with APCL.

April 26 – Capstone has landed a rental contract for a 600 kilowatt (kW) microturbine-based system with one of the largest energy infrastructure companies in North America. Due for commissioning in mid-May 2022, the plant will supply power to remote mid-stream operations along the customer's gas pipeline in Colorado.