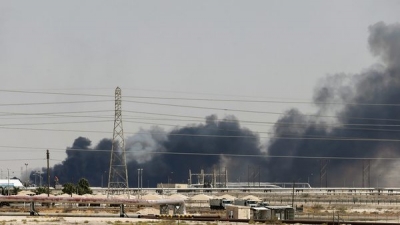 Drone strikes have reduced Saudi Arabia’s oil output by half which is feared to have reverberations on global energy markets. An increase in oil prices is likely to lead to a corresponding rise in gas and electricity prices, which will be reflected in higher tariffs for customers in the UK and most western economies.

Published in Markets
More in this category: « PetroVietnam, Samsung aspire importing LNG for power units by 2022 Renewables cheaper than fossil power by 2030 »

June 16 – The US Navy has taken delivery of the USS Zumwalt, its first full-electric power and propulsion ship, equipped by GE’s Power Conversion. The ship features a high-voltage system, propulsion drive trains with multi-phase VDM25000 power converters and advanced induction motors. Kevin Byrne, head of GE’s North America marine segment said “the full-electric power and propulsion ship has the flexibility to direct energy where it is needed on the platform.”

June 15 – Spot electricity prices in New England (NE) has fallen since winter 2019/20 when it stood at an average $28/MWh, down 40% from an average $47/MWh in the previous winter. Low natural gas prices, warmer-than-normal temperatures, lower loads, and reduced needs to run expensive peakload generators were the cause for the substantial drop in NE’s winter electricity prices, the U.S. Energy Information Administration (EIA) finds.

June 12 – Calpine Corp has closed $1.1 billion Climate Bonds Certified financing for its subsidiary, Geysers Power, the largest complex of geothermal power plants in the U.S. Geyers will use the proceeds to repay some debt it owes to Calpine and to fund ongoing operations and maintenance.

June 11 – The UK managed to keep the lights on without using coal for power generation for two months by now, National Grid figures show. Lower demand due to lockdowns and a rising contribution from gas and renewables has rendered less-efficient coal power units uneconomic. All unabated coal power stations are mandated to close by 2025, though Britain’s largest fossil power station Drax has converted its coal units to biomass.

June 10 – Valmet, developer of process technologies for the energy industry, has won an order by the Dutch company CarbonOrO to supply and install a gas clean-up system at Viridor’s Dunbar Landfill site in East Lothian, Scotland, UK. Thy system will transforms landfill gas into transport fuels while capturing carbon.