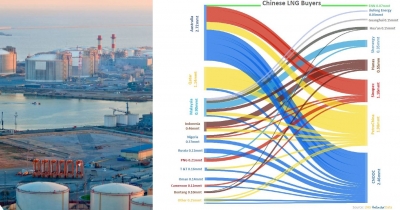 China’s Blue Sky Policy envisages boosting the share of natural gas in the energy mix from currently 7.5 percent to 15 percent by 2030 which requires substantial investment in LNG and pipeline import capacity and related infrastructure. Imports are forecast to meet more than 70 percent of gas consumption in Greater China in 2040.

Jan 21 – Energy demand in India is set to double by 2040, and its electricity demand may triple, according to the International Energy Agency (IEA). Oil consumption in India is seen grow faster than that of any other major economy, making energy security a key priority, the IEA said in its first in-depth review of India’s energy policies. Amid strong growth, renewables now account for almost 23 percent of India’s installed capacity, while energy efficiency improvements helped avoid 15 percent of India’s additional energy demand, oil and gas imports, and air pollution.

Jan 20 – State regulators have approved a permit for Dairyland Power Cooperative to build a $700 million combined-cycle gas power plant in northwestern Wisconsin. The Nemadji Trail Energy Center will produce 625 MW and is scheduled to begin operations by 2025.

Jan 17 – New high performance turbine oils, developed by ExxonMobil Lubricants, are  entering the market which are formulated to prevent build-up of lacquer, varnish and deposits. The oils are designed to protect against thermal and oxidative degradation, one of the root causes of deposit build-up.

Jan 16 – Following the commissioning of a Wärtsilä-built 132 MW power plant in Bahamas in December, the Finish manufacturer now signed a two-year operation and maintenance (O&M) accord with the plant owner, the Bahamas Power and Light Company (BPL). Wärtsilä will transition, train, and develop the owner’s Bahamian work force and provide key performance guarantees.

Jan 14 – Sri Lanka could face power cuts by March, after plans for a large-scale coal power plant were been cancelled just prior to start of construction, and a tender for a 300 MW diesel plants ended up in court. On the demand side, pressure is building up as the region is moving into the dry season in February and March. Weather warnings say the island is likely to receive lower than average rainfall in the first quarter of 2020.

Jan 13 – Caterpillar Inc. has launched a series of new generator sets that comply with the new G99 United Kingdom, VDE-AR-N 4110 German and Belgium C10/C11 grid codes. The following gensets – G3500H, CG132B, CG170, and CG260 (rated from 280-4,500kVA) – have been verified to be able to accommodate different reactive power modes, active power functions, and connection conditions for normal operation or reconnection after mains decoupling.

Jan 9 – Singapore-based Pavilion Energy has completed the acquisition of all gas and LNG assets of the Spanish utility Iberdrola. From its new European headquarters in Madrid, Pavilion said has launched 2020 LNG trading operations with supplies focusing on Spain and the UK market.

Jan 8 – Gazprom and Gazprom Transgaz Belarus have sealed additional agreements to extend the contracts for gas supplies to and gas transportation across Belarus until 2021. According to the newly-signed documents, the contractual supply and transit volumes in 2020 will remain at the level of 2019.

EastMed pipeline to take FID by 2022

Jan 7 – Greece, Cyprus and Israel have signed an agreement to build the 1,900-kilometre EastMed pipeline at an estimated cost of 6 billion Euros. The subsea pipeline, spanning over 1,900-kilometres would initially carry 10 Bcm of gas per annum from Israeli and Cypriot waters to Crete and then on to the Greek mainland and into the European gas network via Italy. A final investment decision (FID) is meant to be reached in 2022, given that the pipeline is scheduled for completion by 2025.

Jan 6 – Fewer emissions from coal consumption, combined with lower energy demand, have helped to significantly reduce the overall energy-related carbon emissions in the United States. According to government statistics, energy-related CO2 emissions fell 2.2 percent last year, and the downward trend is forecast to continue into 2020.

Jan 3 – North Sea Brent crude prices have risen to their highest level since September 2019, up nearly $3 per barrel because of Middle East tensions coupled with improved Chinese economic forecasts. Brent crude futures for March 2020 delivery were last seen trading at 69.21 per barrel the Intercontinental Exchange (ICE). This bullish price sentiment will feed through to oil-indexed natural gas contracts and LNG deliveries, linked to the Japanese crude cocktail (JCC) basket price.

Dec 23 – Rapid rise of wind and solar power in many parts of the world has pushed coal-fired power generation into steep decline in most developed countries. "But this is not the end of coal, since demand continues to expand in Asia," analysts at the International Energy Agency commented: "The region’s share of global coal power generation has climbed from just over 20 percent in 1990 to almost 80 percent in 2019, meaning coal’s fate is increasingly tied to decisions made in Asian capitals."

Dec 20 – In 2019, Germany managed to increase its greenhouse gas emissions for the second year in a row, mainly due to a 20 percent drop of coal use for power generation and a growing contribution from renewables. Energy savings and efficiency increases also helped. According to calculations by energy research group AG Energiebilanzen (AGEB), Germany’s primary energy consumption declined by 2.3 percent this year, overall energy use fell more than 2 percent, and energy-related CO2 emissions fell by as much as 7 percent.

Dec 19 – UK-listed mining company Glencore has agreed to take over a loss-making natural gas business from Orsted, including long-term import capacity at the Gate regas terminal in Rotterdam and five other LNG purchase agreements. “The transaction entails a payment from Orsted to Glencore and will result in a loss that exceeds our current provision related to the LNG activities,” stated Copenhagen-based Orsted without disclosing the value of the transaction.

Carbon-intensive firms may shed over 40% in value

Dec 18 – Energy- and carbon-emissions intensive companies could lose up to 43% of their value if national governments enact more stringent policies to reduce air pollution and tackle climate change. Companies using green energy, in contrast, could gain up to 33% in value, research by the United Nations-backed Principles for Responsible Investment (PRI) finds.