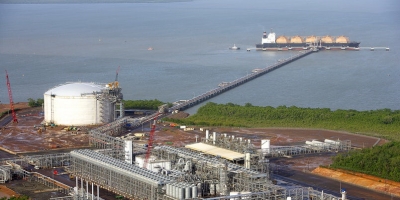 Dominion Energy has struck a $9.7 billion deals to sell its gas transmission and gas storage assets to Berkshire Hathaway Energy, owned by the U.S. billionaire investor Warren Buffet. As part of the transaction, Berkshire Hathaway will acquire 25% of the Cove Point LNG plant in Maryland.

July 29 – Howden will deliver a hydrogen compressor to Johnson Matthey to serve the world’s first methanol plant that harnesses energy from the wind, in Patagonia, Chile. The Haru Oni project will deliver around 900,000 litres per year of e-methanol as early as 2022 and will be scaled up to 550 million litres of e-fuels per year by 2026.

July 28 – California-based Bloom Energy, in cooperation with SK ecoplant, will install solid oxide fuel cells (SOFCs) in a combined heat and power (CHP) plant in Donghae City, South Korea. The CHP will provide heat and warm water for the nearby Bukpyung sports center. Construction on the project is slated to start this autumn.

July 27 – Shanghai Electric has entered a partnership with AI Investment Fund at the WAIC 2021 conference to provide digital solutions to industrial parks and medical institutions. Yang Hong, Vice President of Shanghai Electric said the aim is to help industries to minimise emissions and waste while maintaining low unit costs.

July 26 – In Africa, the uptake of LNG imports to new markets has been slow. Both Ghana’s 1.7 million tons per annum (mtpa) Tema LNG and Senegal’s 1.0 mtpa Dakar Powership are still awaiting their first LNG deliveries, though their respective FSRUs Vasant and Karmol LNGt Powership Africa have been in place since June.

July 22 – The turbine air filtration market is expected to grow 3.27% annually from $1.92 billion in 2020 to reach $2.29 billion in 2026. Demand from the oil & gas industry and electric utilities had plunged during the corona crisis and subsequent economic downturn, but the latest trend towards clean energy is driving robust growth for turbine air filtration which can be widely and easily applied in the power sector.

July 21 – Despite volatile prices, U.S. crude oil exports reached a record high in 2020 and remained strong this year, averaging 3.51 million barrels per day (b/d). Expanded ports at Houston and Corpus Christi allow for oil to be exported from the Permian Basin and Eagle Ford Basin.

CVEC to be converted to hydrogen

July 20 – Cricket Valley Energy Center (CVEC) is taking steps to run the  combined-cycle plants on hydrogen. Works to convert the plant will be carried out by GE and are scheduled to start in late 2022. One of three GE 7F.05 gas turbines at CVEC will be introduced to a 5% hydrogen blend with natural gas.

Electricity sales to US industry rebounds

July 14 – Economic recovery has caused a 5.1% rise electricity sales to US industry this year, dwarfing 2.8% more retail sales and a 2.1% rise in the commercial sector as many office workers continue working from home. The US Energy Information Administration’s (EIA) acting administrator, Steve Nalley, called the rebound in electricity sales to industry a “strong sign of rising levels of economic output as the Covid-19 pandemic recedes.”

July 13 – Asia Pacific solar photovoltaic capacity could triple to 1,500 gigawatts (GW) by 2030. According to Wood Mackenzie estimates, China will add 619 GW of mainly utility-scale capacity while most other nations in Asia prefers distributed solar due to land constraints. Solar PV tends to be backed up by flexible gas gensets and energy storage, forming hybrid power units.

July 12 – US energy infrastructure major Kinder Morgan has closed its acquisition of Stagecoach Gas Services. The deal include 4 gas storage facilities with a 41 bcf working gas capacity and a transmission network with multiple interconnects to major interstate pipelines, including Tennessee Gas Pipeline. The Stagecoach assets add to Kinder Morgan’s approximately 83,000 miles of pipelines and 144 terminals.

July 9 – The elektrotechnik fair, planned for 29 September to 1 October 2021, will now not be taking place in Dortmund due to requests from the industry. The next trade fair for building, industrial, energy and lighting technology will now open its doors again in spring 2023.

July 7 – Hitachi ABB Power Grids will become Hitachi Energy in October. The Japanese manufacturer bought a controlling stake in ABB’s grid business a year ago and is about to fully take the name of the merged company while expanding its direction towards e-mobility and data centres.

July 6 – Spanish utility Naturgy and the gas grid operator Enagás are evaluating the use of 350 MW offshore and onshore wind capacity to produce green hydrogen. The fuel will be used to decarbonise the steel industry and shipyard in northwest Spain.

July 5 – The European Green Deal should be expanded to also include African states as partners, the German development minister Gerd Müller said. Green hydrogen production in Africa, in his view, should be a “cornerstone for economic cooperation with the Europe.”

July 2 – Northern Ireland-based Decom Engineering has invested more than £700,000 to develop tools for repurposing and clean decommissioning of energy infrastructure. Through updated Pipe Coating Removal (PCR) equipment, decommissioned or surplus pipelines can be cleaned of multiple coatings, so they can be repurposed for used on other projects.

Cummins buys half of Momentum Fuels

July 1 – Cummins has signed a letter of intent to acquire a 50% equity interest in Momentum Fuel Technologies from Rush Enterprises. The transaction is expected to close before year-end, and the combined venture will produce Cummins-branded natural gas fuel delivery systems for the commercial vehicle market in North America.