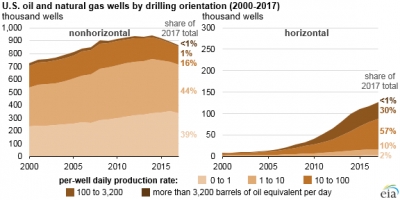 Despite the drop in rig count, the actual output of crude oil and natural gas keeps rising in the United States thanks to advances in technology and drilling techniques. Even with fewer wells U.S. natural gas gross withdrawals increased from about 78.7 billion cubic feet per day (Bcf/d) to 83.4 Bcf/d.

Published in Markets
More in this category: « Oil and gas industry caught in a Capex conundrum Japan’s cost of LNG imports jump 49%, may accelerate nuclear restarts »

July 15 – The International Energy Agency (IEA) expects China to overtake Japan as the world’s biggest LNG buyer with imports of 128 Bcm a year by 2025, equivalent to around 174 million tonnes. However, IEA analysts cautioned this scenario is “highly dependent on China’s future policy direction” and whether that includes an ongoing push for coal-to-gas switching for industry, residential heating and power generation.

July 14 – Ministers from dozens of countries, accounting for over 80% of the world economy, have participated in the first Clean Energy Transitions Summit organised by the International Energy Agency (IEA). Dr Fatih Birol, the IEA’s Executive Director, said there “clearly is momentum” behind a sustainable recovery from the economic impacts of the Covid-19 pandemic. Participants agreed to reconvene in mid-2021.

Jul 13 – Newly formed technology company Siemens Energy wants to phase-out any operations and technology to related to coal-fired power generation, CEO Joe Kaeser said, without giving a specific timeline. Siemens had been harshly criticised earlier this year for participating in the Adani coal mine project in Australia.

July 9 – A large majority of Siemens shareholders have voted to approve the spin-off of the company’s energy business. The spin-off was approved by 99.36 percent of capital stock represented at today’s extraordinary shareholders’ meeting.

July 8 – GREEN Solar and Siemens Energy are jointly developing a concept for making Herzogenrath CO2-free. The plan is to provide an energy-efficient and economical combination of solar power plants, wind turbines, batteries, CHP and combined cycle power plants, as well as heat and hydrogen storage. The hybrid system will be built on the grounds of Nivelsteiner Sandwerke and will be large enough to cover the city’s entire energy demand with zero CO2 emissions by 2030.

July 7– Denmark on late Monday gave the Nord Stream 2 consortium permission to utilize pipe-laying vessels with anchors in Danish waters, paving the way for the Gazprom-led consortium to complete the interconnector. Construction of the 1,230-kilometre pipeline is nearly complete, except for a final stretch of about 120-kilometers in Danish waters. The project was halted in December when the Swiss-Dutch pipe-laying company Allseas suspended works over threats of U.S. sanctions.