AES exits Jordan and the UK, divests all interests in power gen assets 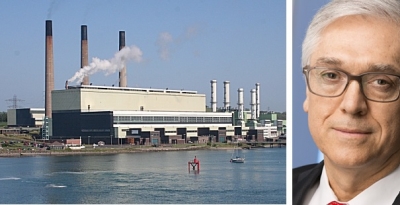 The U.S.-based Fortune 500 power company AES Corp is divesting its interests in six power plants in Jordan and the United Kingdom for a total of $211 million. Andrés Gluski, AES’ President and CEO said the company decided to cut back the number of countries in which it operates and will shift its focus to renewables, energy storage and LNG.

Jan 19 – Rolls-Royce has delivered the first 8-cylinder variant of its Bergen B36:45 gas engine to a tomato producer in Belgium. The medium speed genset is planned for delivery this spring and will drive an onsite power plant that generates 4700 kW electricity and 5520 kW heat. The new engine offers a 20% increase in power per cylinder and will replace an existing Bergen 12-cylinder B35:40 genset.

Jan 15 – General Electric has sued its German rival Siemens Energy over the alleged use of stolen trade secrets to win gas turbine contracts worth several billion dollars. GE told the US district court in Virginia that Siemens received the secret information from a Dominion Energy employee.

Jan 13 – South Korea’s imports of thermal coal and LNG have fallen 12% and 11%, respectively, as the government cracks down on fossil fuel usage to curb air pollution. Customs data shows that coal imports amounted to 10.2 million tons in December, down 1.4 million tons from the same month last year but up from November’s imports of 9.5 million tons.

Jan 13 – Excellent Energy Resources, part of SMC Global Power Holdings, is building a 1,700 MW combined cycle gas power plant in Barangay Dela Paz and Ilijan in Batangas City with investments of about 67.863 billion Philippine Pesos ($1.41bn). The project is estimated to be completed in 36 to 40 months.

Jan 12 – Natural gas prices in the UK surged as National Grid issued warnings on supply deficit as LNG cargoes are being diverted to North Asia. Prices at the British NBP gas trading hub soared to the equivalent of $8.95 per MMBtu, while the JKM price for North Asian spot LNG cargoes for February 2021 was last at $19.700 per MMBt.

Jan 11 – Fortistar, a privately-held fund, has joined an equity investment of up to $157 million in hydrogen producer BayoTech. Cottonwood Technology Funds and the New Mexico State Investment Council also participated in the latest financing round. BayoTech’s systems produce local hydrogen close to the application, serving end users in the industrial gas and petrochemical segment as well as those who use of hydrogen to power fuel cells.

Jan 5 - Ashtead Technology has appointed a chief financial officer (CFO) and five managers for newly created roles across its international team. The appointments are meant to cement the company’s position in the offshore energy market, including offshore wind and decommissioning of thermal power plants

Dec 23 – New Fortress Energy (NFE) has agreed to purchase Henry-Hub-indexed LNG for its integrated gas and power businesses in Puerto Rico, Mexico and Nicaragua. The New York-based project developer said it now has covered 80% of its expected needs throughout Latin America, thus reducing its need for spot purchases and its exposure to changes in the market price for LNG.

Dec 22 – The Chinese government has launched a coal-to-gas boiler switching programme, targeting 7.1 million homes, which makes gas demand more weather-sensitive this winter. Similarly, South Korea mandated the closure of 15 coal-fired plants since the start of December in an effort to reduce air pollution. Analysts expect this will accelerate the drawdown of LNG terminal inventories going into Q1-2021.

Dec 21 – GE Power Conversion has been awarded a contract by Sulzer Pumps UK to supply motors for four water injection pumps of a Floating Production Storage and Offloading (FPSO) vessel. The 8,000 kW, two pole motors will run at 3,600 rpm with a limitation of the starting current at 300%, enabling the oil and gas field operator to optimise the generator which supplies electricity on the FPSO.

VELO distributes Sapphire Metal 3D-Printers in the US

Dec 18 – California-based VELO3D has formed a distribution partnership with GoEngineer for Flow pre-print software, Sapphire metal AM printer, and Assure quality assurance and controls. GoEngineer will be VELO’s only distributor in the United States.

Dec 16 – A pilot auction, held by the Italian TSO Terna, for battery energy storage systems (BESS) to provide reserve grid services has been six times oversubscribed. The auction was held with an expectation that around 230 MW would be on offer, but Terna received 1,327 MW worth of bids and eventually awarded contracts for 249.9 MW.

Dec 15 – National Grid has completed a gas pipeline under the River Humber, build in 18 months and at a cost £150 million, as new link to the import terminal at Easington. Following commissioning, the pipeline is now operational and can now transport between 70 to 100 million cubic metres - around a quarter of Britain's gas needs.

Dec 14 – Energy sector-related emissions in the US are expected to fall 11% this year, largely due economic and behavioural effects the coronavirus pandemic. According to the EIA's December Short-Term Energy Outlook (STEO), emissions in 2020 are forecast fall by 19% for coal, by 13% for petroleum, and by 2% for natural gas.