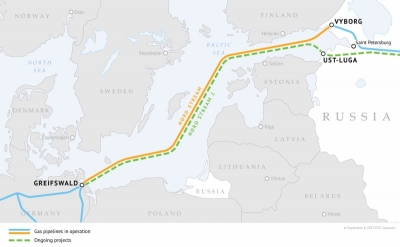 Unfazed by Ukraine’s vocal protest, permitting is advancing quickly for Nord Stream-2 AG to build a second pipeline through the Baltic Sea. Finland has just given the green light for pipe laying in its Exclusive Economic Zone (EEZ), all German permits are on the table, but final approval under the Finish Water Act is still pending. Gazprom, the main project sponsor, is now pushing to start construction, stressing the pipeline will “deliver the additional gas required by Europe at a competitive price.”

July 31 – The Japanese utility Tokyo Gas has agreed to raise its stake in the U.S. firm Castleton Resources to 70 percent from 46 percent to increase its foothold in shale gas production in Texas and Louisiana.  Castleton Resources holds acreage in the Haynesville and Cotton Valley formations. The transaction is scheduled to be completed on August 14.

July 30 – The market for electrical protective equipment (PE) in North America, valued at $2,787 million in 2019, is forecast to rise at an annual rate of 1.7 percent to reach $3,163 million by 2027. Main growth drivers, according to ResearchandMarkets, are ongoing power transmission projects in the context with U.S. LNG export infrastructure expansions.

July 29 – DS Smith Paper Italia has ordered a GE LM6000PF aero-derivative gas turbine for its paper mill in Lucca, Italy. The paper mill is currently powered by two aero-derivative turbines, and the additional unit will increase plant efficiency by 2%, while assuring steam supply for the industrial process.

July 28 – UK battery developer Aceleron today announced receipt of a £2 million equity investment from BGF and Mercia Asset Management. Aceleron is BGF’s second investment into a pure clean technology, signalling a shift in behaviour as more and more fund managers support a green recovery and the UK’s policy of net-zero carbon by 2050.

July 27 – U.S. utility NRG Energy has agreed with Centrica to acquire the latter’s North American subsidiary Direct Energy for $3.625 billion in an all-cash transaction. The transaction will diversify NRG’s earnings by adding more than three million retail customers and generate an estimated $740 million in adjusted EBITDA upon closing.

July 24 – Siemens is deploying its workplace experience solution Comfy across its global offices, including major utility customers. The aim is to equip approximately 600 company locations by October 2020.

July 23 – Sustainability aspects are poised to bring about "fundamental change" to the way financial market actors operate, said Philipp Hildebrand, vice head of U.S. investment company BlackRock. About 18 billion dollars have been put into BlackRock's sustainable investment products since the beginning of 2020, he told the German business daily FAZ, arguing this would be "only the beginning" of a much larger shift in investment practices.

July 22 – Argentina has resorted to importing LNG for the Southern Hemisphere winter as domestic production at the vast Vaca Muerta shale formation fell in the first half of 2020. State-owned IEASA purchased 28 LNG cargoes at average prices of $2.87 million British thermal units (mmBtu).

July 20 – Wärtsilä CEO Jaakko Eskola has told analysts he sees a “tough second half of the year ahead,” as the Finish manufacturer seeks to mitigate Covid-related business disruptions. In the segment of up to 500 MW, Wärtsilä’s market share fell from 9% to 8%, while orders for gas- and liquid- power plants increased by 1% to 17.8 GW during the twelve-month period ending in March 2020.

July 16 – Germany's green energy fund, funded through the renewable energy surcharge (EEG levy), has slipped into the red for the first time since 2013, according to TSO data. The account, funded by end-customers through a surcharge on their power bill, fell from about €2 billion in available funds to €-1.16 billion in the first six months of 2020.

July 15 – The International Energy Agency (IEA) expects China to overtake Japan as the world’s biggest LNG buyer with imports of 128 Bcm a year by 2025, equivalent to around 174 million tonnes. However, IEA analysts cautioned this scenario is “highly dependent on China’s future policy direction” and whether that includes an ongoing push for coal-to-gas switching for industry, residential heating and power generation.

July 14 – Ministers from dozens of countries, accounting for over 80% of the world economy, have participated in the first Clean Energy Transitions Summit organised by the International Energy Agency (IEA). Dr Fatih Birol, the IEA’s Executive Director, said there “clearly is momentum” behind a sustainable recovery from the economic impacts of the Covid-19 pandemic. Participants agreed to reconvene in mid-2021.

Jul 13 – Newly formed technology company Siemens Energy wants to phase-out any operations and technology to related to coal-fired power generation, CEO Joe Kaeser said, without giving a specific timeline. Siemens had been harshly criticised earlier this year for participating in the Adani coal mine project in Australia.

July 9 – A large majority of Siemens shareholders have voted to approve the spin-off of the company’s energy business. The spin-off was approved by 99.36 percent of capital stock represented at today’s extraordinary shareholders’ meeting.