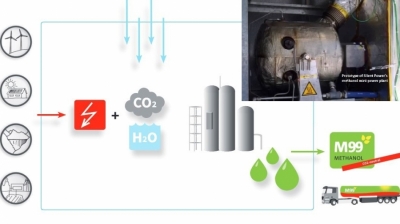 Silent-Power Project, a Swiss technology start-up, is producing of CO2-neutral electricity from methanol. CEO Urs Weidmann told Gas to Power Journal the company aims to achieve an annual production of 1 million liters of carbon neutral methanol with its first synthesis plant by 2020.

July 8 – GREEN Solar and Siemens Energy are jointly developing a concept for making Herzogenrath CO2-free. The plan is to provide an energy-efficient and economical combination of solar power plants, wind turbines, batteries, CHP and combined cycle power plants, as well as heat and hydrogen storage. The hybrid system will be built on the grounds of Nivelsteiner Sandwerke and will be large enough to cover the city’s entire energy demand with zero CO2 emissions by 2030.

July 7– Denmark on late Monday gave the Nord Stream 2 consortium permission to utilize pipe-laying vessels with anchors in Danish waters, paving the way for the Gazprom-led consortium to complete the interconnector. Construction of the 1,230-kilometre pipeline is nearly complete, except for a final stretch of about 120-kilometers in Danish waters. The project was halted in December when the Swiss-Dutch pipe-laying company Allseas suspended works over threats of U.S. sanctions.