Japan’s Mitsubishi Power, part of MHI Group, has struck a licensing agreement with the French metallurgical firm Aubert & Duval related to metal powders used for additive manufacturing, or 3D Printing. The supply deal allows Mitsubishi to develop a 3D Printing base within its Hitachi Works in Ibaraki.

GE Research has been awarded a $1.6 million project to develop refractory alloys, based on novel material that would enable turbine blades to operate at 1,700°Celsius, or 3,092°Fahrenheit. The aim is to develop niobium-based alloys to push combined-cycle gas turbine efficiency beyond 65%.

Nokia and the Austrian telecommunication provider A1 are looking to set up a private wireless network (VPN) to operate utility microgrids. The application will be tested at A1’s so-called campus solution, deployed at the company’s headquarters in Vienna.

Germany’s federal state North Rhine-Westphalia (NRW) has freed up €200,000 in funding to evaluate MAN ETES energy storage. The still-untested technology offers a CO2-free alternative to large-scale heat supply and the study is a prerequisite for building a pilot unit near Aachen in 2021.

Ansaldo Energia has today unveiled the first GT36 gas turbine, the highest performing H-Class turbine ever built in Italy. The GT36 left the workshop in Genoa, en route to Edison’s Porto Marghara combined-cycle power plant where it will increase capacity to 780 MW at 63% energy efficiency.

General Electric will apply lean operating principles to transform its PT GE Nusantara Turbine Services (PT GENTS) in Bandung, Indonesia, into a global B- and E- Repair Center of Excellence (CoE). The facility has already shipped its first set of repaired turbine blades to a customer.

Petrochemical factories are hard-pressed to lower operating costs and emissions, hence Siemens Energy and Linde have teamed up to develop technology and equipment to decarbonise the industry. Optimizing power and steam is in focus, as well as cleaner steam crackers to produce olefins.

Tenerife will be home to Spain’s first green substation, based on GE’s Green Gas for Grid (g³) technology – an alternative to sulfur hexafluoride (SF₆) insulating gas. The development of g³ has taken more than ten years of work by GE’s research teams in France and Switzerland, together with 3M.

Cummins gets grants worth $4.6 million to advance SOFCs

US manufacturer Cummins has received a federal grant, worth $4.6 million, to advance commercialization of solid oxide fuel cells (SOFCs). The aim is to develop a system that would produce electricity at a price below $1,000/kW, with testing scheduled to start in 2021.

Producing “blue” hydrogen from natural gas along with carbon capture, utilisation and storage (CCUS) can cost around 22% less when using a process launched by Shell Catalysts & Technologies. With CO2 costing $25–35/t, “blue” hydrogen becomes competitive with “grey,” unabated one, even with its higher capital costs.

Blended hydrogen can be distributed via existing UK gas networks

National Grid and gas distribution networks evaluate hydrogen blending and point-of-use separation to transport hydrogen through the existing grids. The aim is to decarbonise energy for heat, transport, industry and power generation as the UK targets net zero carbon by 2050.

Oct 19 – B&W's Renewable segment and Port Anthony Renewables Ltd have started to develop a biomass-to-hydrogen energy project in Victoria, Australia, based on B&W’s BrightLoop technology. When completed, the plant is expected to be part of the largest green hydrogen hub in south-eastern Australia.

Oct 18 – Liquefied natural gas and pipeline supplies have experienced an even sharper increase in prices in 2021 than oil, driven by a combination of circumstances that included a strong recovery in demand in North Asia, southeast Asia and Europe, unseasonal weather and planned and unplanned capacity outages.

Oct 14 – The Finish technology group Wärtsilä has been awarded a contract to supply four shaft generators to provide electricity take-off from the main engines of two LNG carriers. The ships are being built at the Hyundai Heavy Industries (HHI) shipyard in Korea on behalf of the Capital Gas Ship Management of Greece.

Oct 13 – Vision Hydrogen Corp has announced that its affiliate VoltHe has received building and environmental permits to realise its first large-scale hydrogen plant at the Dutch North Sea Port of Vlissingen. The 5 MW hydrogen plant is located near existing high voltage power and gas infrastructure as well as large wind power assets. Once operational, it will produce around 3,500 tons of green hydrogen per year and will be scalable to 100 MW or 14,000 tons.

Oct 12 – Sales of Tesla in Germany has overtaken that of leading German carmakers. In September, more electric Tesla Model 3s were registered in the country than leading domestic models, such as the BMW 3 Series, Audi A4 and Mercedes C-Class combined.

Oct 8 – The German government has agreed to support green hydrogen projects in other countries with up to €350 million by 2024, the economy ministry said when publishing a directive with relevant guidelines. Moreover, financial support is given to projects that produce and process green hydrogen for storage, transport and use in countries outside the EU through investment grants worth up to €15 million each.

Sept 29 – Aggreko has today announced it has reached 2GW of live global gas power capacity and growth in flare gas to power and stranded gas projects. This new record follows a milestone of exceeding 1GW of delivered flare gas power projects in 2020.

Sept 28 – The Finish technology group Wärtsilä has renewed a long-term Operation & Maintenance (O&M) agreement with Lafarge Africa, a large producer of building materials in Nigeria. The agreement covers the 100 MW Lafarge Ewekoro power plant, which provides a dedicated supply of electricity to the company’s concrete and cement manufacturing processes.

Sept 22 – The global biogas market is set to expand at a rate of 8.4% annually and reach $88.47 billion in 2025. According to ResearchAndMarkets, the main growth drivers are small-scale power generators that use biogas derived from municipal or agricultural waste through anerobic digestion.  Europe was the largest region in the biogas market in 2020, though Asia Pacific recorded the fastest growth. 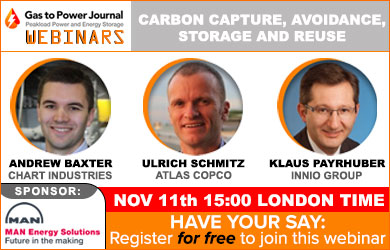